In February 2015 I started a small Chinese learning experiment. After heaving read the famous books like Fluent Forever by Gabriel Wyner and Fluent in 3 Months by Benny Lewis, I wanted to study Mandarin Chinese for about 8 months and take the HSK Level 4 exam in October here at the Asia-Orient-Institut of the University of Zurich. 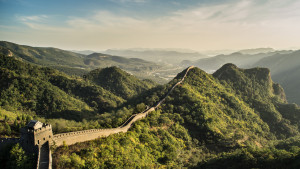 Huangyaguan, section of the Great Wall near Tianjin

As I’m still in the process of acquiring my Master’s degree in Physics here at ETH Zurich, it seemed necessary to stretch these magic “3 months” of full-time language learning to a slightly longer period. In the end, however, I managed to get a one month break from university and spend 4 weeks in China, fully concentrating on my studies of the Chinese language.

Returning from this trip in the mid of October, I still felt quite uncomfortable with my Chinese skills and almost decided to not take part in the test.

As I’m not a fan of handwriting — neither in my mother tongue German nor in Chinese — I didn’t practice the writing of Hanzi at all before taking the test. Even in China, I never had the urge to write a character by hand as all communication today is by means of a smart phone or a computer. And I rather spend my time learning new words and characters instead of trying to write the ones I know by hand. Unfortunately, only the written Chinese test is available in Zurich. But as for Level 4, the first part of the writing section consists rearranging characters and only second part requires to really write and not simply copy the signs. So my plan was to skip this second part.

A few days ago, I checked the results page of the Hanban institute and surprisingly found out, that I achieved 198 of 300 points. Close to the 180 necessary to consider the test “passed”, but it’s OK. In fact, I only failed in the writing section with just 36 out of 100 points. The rest went quite well with 72 points in listening and even 90 points in reading.

So, now I want to explain a little bit, which methods I found useful during my learning challenge and which parts didn’t work out so well.

Knowing the words of a foreign language is the most important issue for me.

Having studied some Swedish and Portuguese before, I became a huge fan of Anki and the so-called spaced-repetition technique. In February, there was a nice deck available covering all 5000 words of the HSK vocabulary. During these 8 months I mostly studied the 1200 words needed for HSK 4.

However, after arriving in China and doing some mock exams, I found out quite late, that it’s not sufficient to be able to recognize the words, meaning the combination of some characters, but also the characters themselves. For example, I only learnt to recognize 但是 (conjunction similar to “but”), where in fact this is often abbreviated simply as 但. Abbreviations are very common in the Chinese language, thus it was necessary to study all the individual characters on their own and not just their compounds as they appear in the HSK vocabulary.

This is now included in my own Anki deck (based on the one I found in February). When learning the word 但是, it is followed by an additional card only for 但 (but not for 是, as it already appeared before).

The Words are not Enough

Another problem was, that I only focused on the vocabulary for the HSK 4. This seemed logical to me in the beginning, as I wanted to pass HSK 4! However, I found it extremely difficult to find resources for learning Chinese, which are limited to the 1200 words of the HSK 4. For example, the ChinesePod Intermediate level and of course most everyday conversations were difficult to understand using such limited vocabulary. So I ended up knowing all the words for the exam, but having no means to actually get familiar with the stuff I learnt!

For other learners, I would recommend to start with a set containing 1000 to 5000 of the most common Chinese words and not only focus strictly on the HSK lists, as those two seem to be quite different.

For listening practice I found ChinesePod the most valuable resource. Hours (or even days) of listening and interesting explanations about grammar and cultural topics in China.

The price for a ChinesePod subscription is quite high. However, as written on their website, all lessons up to #1127 are released under the Creative Commons license. Thus, all those podcast can be downloaded for free and can easily be found on Google. This gives an extremely valuable resource for listening to Chinese in an efficient and fun way.

Not the Perfect Level

However, when studying for the HSK 4, I was somehow stuck in between the Elementary and Intermediate level. I found the Elementary too easy and boring, but for the Intermediate level, my knowledge of vocabulary often seemed too low. So, I had a hard time reading through the transcripts trying to figure out, how many words of the dialogue I could have understood at all. The problem with Chinese, as compared for example with French is, that not a single word is similar to the ones I know from English or German. So, very often it’s impossible to guess the meaning of a word you haven’t learnt before. This is the reason why I recommended in the Anki section before, to increase the vocabulary with the most common Chinese words prior to practice listening or reading.

A very efficient way to increase my reading ability in Chinese was to get some so-called Graded Readers. These books are especially written for learners of a foreign language and are written in a more simple language using limited vocabulary.

So, when I spent my 4 weeks in China, I invested some 15 Euro to buy lots of graded reading books on the Chinese Amazon. The Chinese books are in fact very cheap and only cost around 1-2 Euro each.

I tried some of the Mandarin Companion, Chinese Graded Reader and Chinese Breeze series.

The Mandarin Companion was a good start and the only one available for the Kindle. However, the 300 characters are very limited and not that challenging for the HSK 4 level. For 6.50 Euro per book they’re also not a good value compared to the Chinese books.

Chinese Graded Reader I didn’t even start reading as every text comes with Pinyin. There’s a card included in each book to hide the transcription, but I found it very annoying to use.

Chinese Breeze was the series I ended up having the most fun with. Level 3 consists of 750 words, which is quite close to the HSK 4 level. I found them quite easy to understand and thus had a lot of fun reading my first books entirely in Chinese.

The last three and a half weeks prior to my HSK exam, I spend at the Civil Aviation University in Tianjin. I had an extremely nice guest family, which I met on Couchsurfing. So, every day I tried to meet some local student and have some language exchange with them. Luckily, all Chinese students want to improve their English and are very happy to be able to speak to foreigners.

Spending some time in China can be very convenient to study Chinese. And in my case it only cost me time, as the total cost of living in China for one month, including the flight from Zurich to Beijing and back, was even lower than the typical amount of money I spend during a month of low-budget student life in Zurich.

However, as I will not soon have the opportunity to visit China again for such a long period, I will have to rely on Skype meetings through italki or meet some new Chinese friends here in Zurich (there are many).

During those 8 months of studying the Chinese language I gained lots of new experience concerning the very diverse and interesting Chinese culture. It has also brought some valuable new insight into mastering the art of learning a foreign language to me. With this additional experience and skills I learned, I’m now motivated to tackle other challenges of learning yet a different language and maybe coming back to Chinese after some time.

But I think many of the principles of language learning can be applied to learning in general. Focusing on just a few strategies and critically analyzing the usefulness of each one is very useful in everyday challenges. However, I found it difficult to apply these principles to my studies at university due to the strict plans of what to learn at which point of time. Thus, not having to follow a given course plan can proof to be very efficient. However, the current way of teaching at universities often does not allow the use of custom learning methods due to tight schedules and the expectation to follow the course structure.